As many of you know, we specialize in the Subaru platform and we wanted to retain our previous set record (10.01) for the quickest and fastest Subaru in Michigan. We took our client Ryan’s car to the track after it hibernated in our showroom for the better part of 8 months. The car is still utilizing an IAG Closed Deck short block, Precision 6266 Turbocharger, and ID2000 fuel injectors, all tuned on COBB Accessport Flex fuel. With a few minor tweaks and a fresh clutch thank to Exedy Racing, we were able to get it to the track on a cool evening. First pass, off the trailer, resulted in a monster 9.94 ET at 141mph! Feeling confident, we dropped the tire pressure a tad to bring the car around for another pass to back it up. Alex decided to try a bigger burnout and leaving on a little more boost to attempt to crack into the 9.80s. Launching the car at a little higher boost pressure (25 vs 20psi), the car left HARD. As soon as Alex let off to grab second gear, the rear end input yoke let go. This is an uncommon failure, but not impossible on hard launches with sticky tires. Being late in the season, we decided to park the car for the year and see where Ryan want’s to go with it in the off season. One thing is clear, though: If you want to go fast with a Subaru, BCP is the place to bring it! 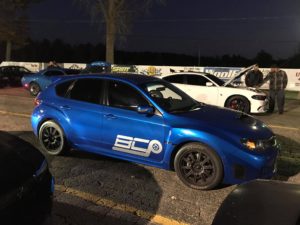 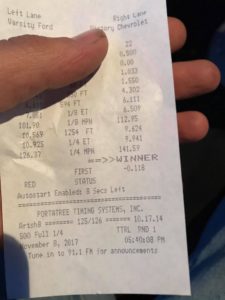